If you’re a free software kinda person who feels guilty about your heresy/iPhone purchase, you can always try to ease your karmic burden by rocking the Free Software Song as a ringtone (128k, no copyrights claimed.)

This Week In Noxious Gadgetry (Teh Internets in Yr. Pants edition)

I’ve owned an iPod touch since the beginning of the year and it’s a pretty cool device— it does the expected iPod stuff with a very nice screen for video and the bonus of being a WiFi enabled handheld web browser. I also, for work, carry the world’s worst mobile phone. That’s actually probably a little unfair— it’s probably not so much worse than all the other shitty little phones billions of people carry around, but I do hate the thing — horrible UI, poor battery life, impossible to find accessories (sync cables, chargers) for, etc.

Back to positive things, as mentioned above, I really do like the iPod touch, particularly the net-enabledness of it. As ubiquitous as WiFi is, though, finding a quality clear and open connection when I’m out and about is always a bit of a crapshoot. Watching the prerelease hype for the 3g iPhone, I finally decided that what I really wanted was an iPod touch that had an always-on connection. A few months back I looked into getting something like the CradlePoint PHS300, but quickly realized that then I’d be carrying 3 little devices around all the time, and that’s just silly.

So, I, um, bought an iPhone (Tammie did, too.) We hit the sweet spot in terms of availibility — we purchased at the Somerset Apple store on Saturday. This meant that the Friday launch day activation disaster had been resolved (a friend and I talked to a guy Friday who spent 6 hours waiting for a phone), but there were still actually phones available (most stores sold out on Sunday.) We got in line @ 2:30 PM and were inside the store at 4:00. We walked out with two working phones a half hour later.

Hooray for the Remote 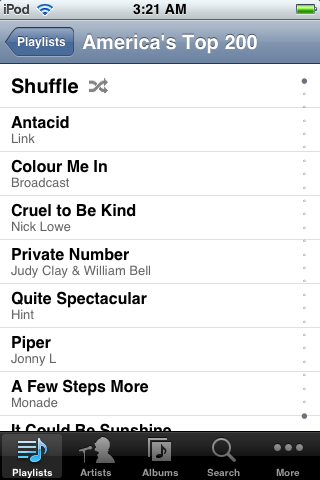 ...and built-in screenshots, too.