The iPad As A Book Reader

This is fifth in an indeterminate series of posts about my experiences with the iPad I bought on 2010-Apr-12.

As it stands now, Apple launched their iBook reader and the iBooks store simultaneously with the iPad. Amazon’s Kindle reader app showed up a few days later, as did more specialized readers like GoodReader, InstapaperPro, Marvel Comics, and Zinio.

I’ll concentrate on iBooks, since that’s the experience Apple is leading with. The first release is actually pretty functional, at least for reading fiction and light nonfiction. I don’t really know how it stands up as a reader for technical documents or more specialized fare. My first iBooks purchase was William Gibson’s Neuromancer, which seemed somehow appropriate — it struck a good balance by being a book I’m pretty familiar with, but at the same time it had prabably been 20 years since I’d last read it.

As you would expect, there’s a lot of polish in the iBooks interface for common tasks like navigating within books, setting bookmarks, and searching. The controls are evident and discoverable, without the “747 cockpit” too-many-widgets problems of a lot of other reading tools. The “real book” accents (like the visual page illusion and the fake inside-cover you see when reading a page) are visually appealing without being overdone.

Despite the cries of “lock in” predictably hurled at Apple from the usual corners, it’s pretty trivial to get books for iBooks from sources other than the iBookstore. Just as iTunes and the iPod family support MP3 files from wherever you buy/find/borrow/steal/convert them, any book you can get into an unencumbered ePub file will be cheerfully synced by iTunes once you’ve added it to your library. It’s pretty simple to run pretty much any non-DRMed book in the most common formats through a tool like Calibre or Stanza Desktop to create an .epub file that’s readable in iBooks. As with MP3 files you find on the web, you can make the resulting book as nice as you want, provided you’re willing to put a little effort into metadata grooming.

There is a lot of backlight control in the iBooks application. It’s very easy to make the screen equally readable in a brightly-lit room or in a completely dark one.

I may have read on a spec sheet once that the iPad gets less battery life than a Kindle between charges, but I’ve yet to run my battery all the way down in a single day doing anything on the device, even performing far more CPU-intensive tasks than book reading, so, um, I haven’t found cause to care.

The biggest problem I’ve noticed, at least with reading, is the the insistence on full justification without hyphenation. It simply makes text harder to read. I can understand that good hyphenation is nontrivial to support, but until we get it couldn’t we at least have the option to display text ragged-right?

Despite all the scare stories from E-Ink partisans about how reading on a backlit screen would make our eyes bleed (conveniently neglecting that most office workers spend several hours a day reading on, um, backlit screens), the real visibility problem I’ve hit with the iPad is reflective glare off the shiny screen when reading in direct sunlight. Like the iPhone screen before it, the iPad screen is pretty much a mirror, so don’t expect to get a lot of beach reading done unless you take an umbrella.

The iPad weighs a lot more than the “pure” e-readers (Kindle, Nook, etc.) If you do a lot of reading in bed, you may find yourself switching the iPad from hand-to-hand a fair bit as your wrists become fatigued.

Diversion — an important clarification re: copying text from iBooks.

A friend linked the transcript of a speech by Steven Berlin Johnson where he expressed concern and disappointment that he was unable to copy text from Charles Darwin’s “The Descent of Man”:

But there are worse things than paywalls. Take a look at this screen. This, as you all probably know, is Apple’s new iBook application for the iPad. What I’ve done here is shown you what happens when you try to copy a paragraph of text. You get the familiar iPhone-style clipping handles, and you get two options “Highlight” and “Bookmark.” But you can’t actually copy the text, to paste it into your own private commonplace book, or email it to a friend, or blog about it. And of course there’s no way to link to it. What’s worse: the book in question is Penguin’s edition of Darwin’s Descent of Man, which is in the public domain. Those are our words on that screen. We have a right to them. 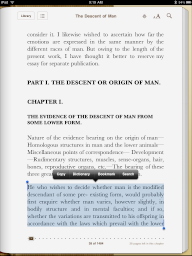 The important bit in that paragraph are the words “Penguin’s edition.” I haven’t downloaded “Penguin’s edition” of the Descent of Man because it’s $12.99 and the Project Gutenberg edition, which is returned by the same search query in iBooks, is free. What I can confirm is that I am able to highlight and copy text from the exact same passage in the Project Gutenberg edition of the book.

I am not arguing that a publisher flipping the “copy inhibit” bit in an eBook isn’t lame — it is. What I am pointing out is that the symptom pointed out by Johnson is under the control of the eBook publisher. It isn’t an Apple mandate, and it’s not some inherent failure of the iBooks platform (nor an Insidious Apple Plot To Lock Up Culture.)

Next up: some nice native apps.

There is nothing more silly than a silly laugh.
— Gaius Valerius Catullus