This is fourth in an indeterminate series of posts about my experiences with the iPad I bought on 2010-Apr-12. I originally planned to post this last Friday, but, um, whatevs…

The iPad’s built-in applications are a bit of a mixed bag. A few of them benefit massively from the increased screen real estate and speed (Safari, Mail, Maps), but don’t really add a lot of functionlity over their iPhone equivalents. In a lot of cases it begins to feel like the applications are just being allowed to exist at the sizes they always wanted to be, if that makes sense. Others (e.g. Notes) feel like a bit of a missed opportunity.

Safari is, in many ways, the most important application on the iPad. Just by being a fast as hell browser you hold in your hands and interact with gesturally, it may be all some folks need to justify the iPad. As I mentioned in a previous post, it handily whips Chrome and Firefox on an Ubuntu netbook, both in page rendering speed and pure joy of use — desktop browsers on small screens are seriously compromised applications, being designed, really, for a very different form factor. There are some small but notable improvements over the iPhone’s Mobile Safari as well. The most immediately noticeable is that videos (both native mpeg4 and embedded YouTube, at least… not yet sure about other h.264-friendly sites yet) are displayed inline, instead of forcing a trip to the video player. There’s also an (optional) bookmarks bar. I even have some of my favorite bookmarklets (or at least the ones that make sense there, like Readability and TBuzz) there. It doesn’t do Flash, but if you care about that you’re probably not reading this post.

It’s hard to tell if Mail on iPad is rewritten from scratch or if only the interface has been redone. Like Mail on the iPhone, it lacks a unified Inbox, but switching between accounts is so fast I don’t really mind. It’s pretty easy to plow through emails on the device. You’re not going to type epics on the onscreen keyboard, but reading emails is almost unreasonably pleasant. 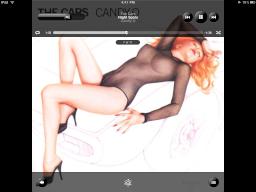 Worthy of note is the iPod application. Aside from the not really portable thing, it’s easily the most visually yummy presentation I’ve ever seen in a music playing application. The screen size allows displaying CD inserts at full size (assuming you’ve embedded suitably large cover art in your metadata), and it’s really striking with a pretty album cover. The onscreen widgets are all consciously finger sized, including the volume slider. It’s all very tactile.

The Maps application is functionally pretty much identical to the iPhone version, but being bigger makes it prettier. That’s pretty much enough for now.

Notepad is pretty pointless. The only difference is the larger screen size. It brings nothing new in terms of syncing or easy exporting of notes. Meh. Even something as simple as being able to use Bluetooth file sending would help matters. It still insists on Marker Felt.

The Photo viewing app is gorgeous, but it’s not the easiest thing in the world to find the one photo you’re looking for among thousands. For some unfathomable reason, it doesn’t support iPhoto keywords. As an adjunct, you can turn the iPad into a really expensive digital photo frame from the lock screen. It’s also got that “cool to demo, but kind useless”-feature of being able to click on an album and pinch-zoom on a bunch of pics at once. It’s worth noting that the first time you sync photos from your computer to the iPad, it’ll spend hours “optimizing” them. This is irritating when you have a new gadget you just want to play around with. I recommend aborting the process and deferring it until overnight.

The iTunes Store and the App Store are pretty much exactly what you’d expect, nothing more, nothing less. The YouTube app is presentable, and pulls off the admirable trick of allowing you access to the worst comments on the Internet without shoving your face in them.

I suppose I could treat iBooks as a built-in application, seeing as how you’re prompted to download it from the App Store the first time you go there, but I suppose it’ll get a separate post all its own anyway.

The hater of property and of government takes care to have his warranty
deed recorded, and the book written against fame and learning has the
author’s name on the title page.
— Ralph Waldo Emerson, Journals, 1831