This is third in an indeterminate series of posts about my experiences with the iPad I bought on 2010-Apr-12. 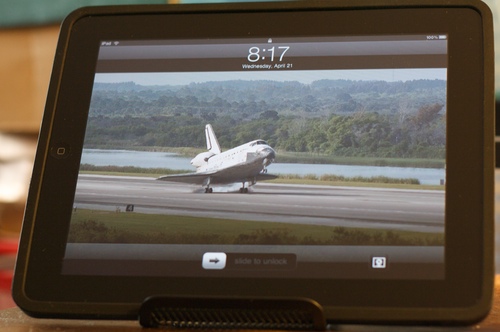 There were a lot of fanciful hardware designs being bandied about by people before the launch of the iPad. There were things that had all sorts of ports, buttons, and frippery, obviously coming from people how haven’t been paying attention to the ruthlessly minimal designs coming from Apple for years.

I didn’t really pay any attention to them, because I knew that externally, anything they shipped would be a moderately sized piece of aluminum and glass wrapped around some very understated functional engineering. It would be something with no fans, no battery covers, and the bare minimum of external controls and ports. 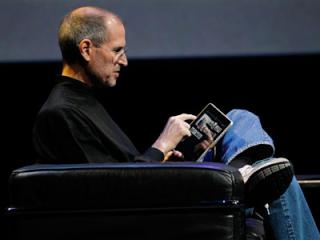 In retrospect, the idea of scaling up the iPhone/iPod touch form was the most logical thing they could have done. This device isn’t being aimed at the neckbeards on Engadget whipping out their spec sheets and measuring units, it’s a device aimed quite specifically at the tens of millions of people whose first experience with Apple was the iPod and/or iPhone. The end result is a device that has a very small number of external controls and interfaces that will feel completely familiar to lots of people. It’s the gadget equivalent of printing “Don’t Panic” across the front in large, friendly letters. It so happens that the chosen form factor is very comfortable for sitting on a couch or an easy chair. There was some grousing that they went with a 4:3 aspect ratio instead of 16:9, but 4:3 makes a lot more sense if you expect that the device is going to spend as much time oriented vertically as horizontally.

After a week of carrying an iPad around in various contexts, I’m very pleased with the form factor. It is a very comfortable thing to carry. The weight, which is somewhat greater than I’d expected, gives the thing a reassuring feeling of solidity. I know, intellectually, that a great part of the weight is the fairly massive battery assembly, but it really gives the impression of being a solid block of aluminum in the hand. As you would expect from an Apple device, the whole thing feels very constructed: there arent any gaps or seams, and there is no “flex” when you grasp the opposite corners in your hands and apply slight twisting pressure. The weight isn’t all good, though. When reading in bed, it’s definitely noticeable if you’re trying to hold the device in one hand. One and a half pounds may not sound like much, but when you’re lying on your back supporting it at eye level, it’s quite noticeably heavier than you’d probably like.

As I stated earlier, it never warms to the touch, even when playing video. There’s some serious hardware witchcraft in this little slab.

All of my performance remarks are subjective. I have an iPhone 3G, and the iPad is dramatically faster in all aspects than the phone. Switching between screens on the Springboard has no delay at all. As stated earlier, the browser is desktop-fast. I don’t know how much of this can be ascribed to the A4 chip, the video hardware, or low-level OS tweaks, but the performance is really quite remarkable.

The multitouch screen is very responsive, of course. I’ll come back to this in a later post, but the iPhoneOS UI really comes into its own when paired with an extra large control surface. There are all sorts of interface niceties that work better on the iPad than on the iPhone, simply because there’s so much more screen and control surface area to work with. The battery life and charging experience is worth a whole post on its own. Suffice to say, being able to get 10+ hours on a charge, even under intensive use, is a huge win.

One minor complaint I have about the form factor is, since the device is perfectly happy to work in any of the 4 possible orientations, it’s very easy to lose track of where the external controls are. I often find myself reaching for the rotation lock or volume controls, only to find they’re on a different edge of the iPad than I thought.

Next up: the included software.

How comes it to pass, then, that we appear such cowards in reasoning,
and are so afraid to stand the test of ridicule?
— A. Cooper