Definition: (noun) A hard thickening of the skin (especially on the top or sides of the toes) caused by the pressure of ill-fitting shoes.
Synonyms: corn.
Usage: Years of wearing uncomfortable stilettos had left a large clavus on her foot.
Discuss

I don’t often vent about Windows here. Anyone who’s read me for more than a minute recognizes that it’s not my main platform. Indeed the only thing I use it for are corporate email (Outlook/Exchange — bleargh) and one or two other work-related apps. I use it seldom enough that I can get away with using it in a VMWare sandbox on my Linux laptop.

There is one “feature” (Windows XP SP2, Outlook 2000, Internet Explorer 6) that drives me up the freaking wall. It’s the completely brain-damaged clipboard handling. Now I know a little bit about how the clipboard works in the Mac OS (classic and OS X). Briefly (and forgive me, Mac coders who know this more precisely than I do here, I’m just making an approximation for the sake of this post), when a user selects copy in an application, the application notifies the OS of the data type of the material copied. It also can optionally inform the OS that it’s capable of providing this data in (n) many other formats, if requested. An application capable of receiving pasted data tells the OS which formats it understands, and the OS brokers between the two so that, for most sane combinations of copied and pasted data, application B gets application A’s clipboard data in a form it can understand. There’s a term for this sort of operation. I’m going to refer to it as “The Right Way To Do it.”

In Windows, though, things don’t seem to work this way. I will confess to knowing absolutely nothing of Windows’ internals (and I’d like to keep it that way, thank you very much), but as a user I’d have to say the behavior I observe multiple times a day is quite broken.

In the most common scenario, I’m browsing a site in IE (yeah, I know, but I’m almost browsing sites inside the corporate firewall) and I need to copy an URL to paste into an email message. I highlight the URL in IE’s location bar, right-click and select “Copy”, then switch back to the compose message window in Outlook, where the “Paste” menu option is dimmed. As in disabled. As in not functional. As in, “no, you may not paste this chunk of text you selected 1.5 seconds ago and paste it into this window where you are, y’know, editing text.” I’ll usually go through this process twice before questioning the ancestry of every individual on the Windows development team and typing the damned URL by hand.

I have observed similar behavior in many Windows apps — an email address copied from my Outlook address book can’t be pasted into a text field into the CRM app we use or IE. I think I know what’s happening — internally, Windows “knows” that the selected text is a URL or an email address, but refuses to offer that “object” as a plain-text string to an application that can handle it, but for the life of me I can’t figure out why that would be the default behavior. Anyone who had done a second of usability testing would realize how broken this behavior is. Can anyone defend this? Linux/Unix clipboard handling (via X11) is pretty basic, but at least you know that when you copy text, you’ve got text you can paste anywhere.

The mantra of moderately-to-very experienced computer users is "customization customization customization", but sometimes we forget how much the customization options built into software for "us" can destroy usability for the less experienced. I just spent 15+ minutes on the phone with an Internet Explorer user who managed to completely obscure his menus. He had all the useless "Sign up for Hotmail NOW!" and "Get Your Free MSN Shotglass" garbage in the toolbar, but the actual menu commands fo using the application were compressed into a tiny, nearly invisible corner of a toolbar with nothing but a couple of small angle brackets to indicate that they existed at all. Why? Because his mouse slipped the other day while he was hitting a link, and IE (ahem) helpfully allowed him to "customize" his interface into unusability. Even figuring out the problem took several minutes, because the visual indicator that IE uses to show that a toolbar is usable is subtle to the point of invisibility to anyone who doesn't know exactly what they're looking for. This led to uncounted repetitions of "look for the slightly raised vertical line next to the slightly smaller indented line next to the 'links' bar and move your cursor really slowly until it turns into a two-headed arrow... no, not that one, the _other_ links item..." I understand (well, not really, but for the sake of this argument let's pretend I do) why someone might want their program menus moved over to, say, the right hand side of a second level toolbar, but why not make it somewhat harder for the naive user to shoot themselves in the face with the option? Would a confirmation dialog be such a bad idea here?

Ah, crap. Looks like my work day's been planned for me.

Who should read this bulletin: Users running Microsoft ® Windows ®

Impact of vulnerability: Three new vulnerabilities, the most serious of which could enable an attacker to run arbitrary code on a user's system.

End User Bulletin:
An end user version of this bulletin is available at: 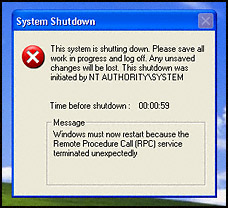 I usually don't like it when Slashdot editorializes in its story summaries, but in this case they're dead-on accurate: (link)

Some Sys Admin sent in an email that he got from Dell which basically says Microsoft will no longer allow Dell to sell PCs without an operating system. Please note that Microsoft is not a monopoly, and does not use their monopoly power to squish competition in the market place.

How can people stand to browse the web using browsers that don't block popups? I can't imagine going back to the status quo.

Udall’s Fourth Law:
Any change or reform you make is going to have consequences you
don’t like.