I complained about Netflix streaming to video game consoles being a Microsoft exclusive. The Hacking Netflix blog talked to Netflix's CEO, Reed Hastings. 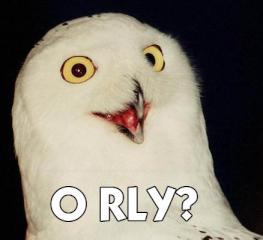 For all I know Microsoft waved fat stacks of cash under Netflix's corporate nose for the exclusive. OK, whatever, that's what companies do. Please don't try to insult the intelligence of your audience by spinning it as a market share thing, or else you'd be on the Wii first.

I really have no use for NASCAR (I can actually say that out loud, now that I don't work for Roush anymore), but it does look really fantastic in high-def. The fast action really shows off the advantage of the progressive scan modes, and the cartoonishly painted cars look fantastic gleaming in the sunlight. 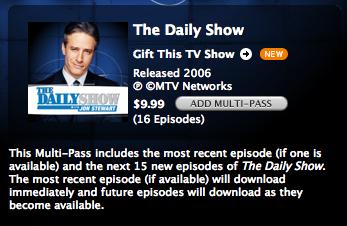 Will this be the way the iTMS handles both paid podcast subscriptions and TV season subscriptions? I noticed the new Daily Show downloads at the iTMS. I occasionally record the Daily Show and arduously edit and convert it for use on my iPod, and at about 63 cents an episode I'm happy to let someone else do the work. 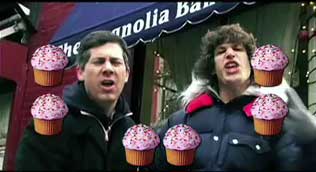 The “Chronic…(WHAT?)…cles of Narnia” thing has been all over BoingBoing and YouTube and del.icio.us and digg and torrent sites and wherever else by now, of course, but I still need to give NBC kudos for formally acknowledging the idea of word-of-mouth marketing and posting this segment as a free download on the iTMS.

(Also worth noting — NBC/Universal posted a free “behind the scenes” thing for Battlestar Galactica at the same time.)

Proof Of How Much The World Has Changed Since The 60s 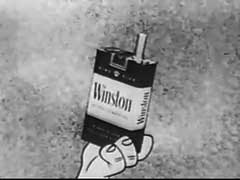 I found this one on a CDROM I found at a dollar store. They didn’t own the copyright either… Anyway, resizing it converting it to modern codecs reduced the filesize by over 90%, so here it is.

I'll refrain from spoilers, because I know that some people won't get to see these episodes until after the inevitable DVD release, but wow, I'm happy to see the Sopranos back at the top of its game. After a distinctly lackluster season 4, the last few episodes have been completely outstanding, worthy of the show's heyday (seasons 1 and 2.)

We Love The Subs

I loved the Quiznos ads they debuted during the Super Bowl. I didn't realize that they were done by the Joel Veitch, and it's based on one of his old bits. Looks like my favorite of them, with the kittens doing Led Zeppelin's "Immigrant Song", is no longer online, doubtlessly due to humorless lawyer people.

Speaking of the BBC, for the next few days (probably until Saturday AM, UK time) there's an audio documentary on the great comedy Blackadder. Go listen before it turns into a pumpkin! (via Neil Gaiman's Journal)

I don't write about television much here, because, generally, it's only marginally more interesting than the most boring blog topic -- blogging about blogging (shudder.) I'm going to break one of my self-imposed rules and talk about a couple of TV programs that I really enjoy.

The first is a program that's relatively new. It started airing on Showtime earlier this summer. It's called Dead Like Me (site), and follows the adventures of a recently undead young adult as she pursues her afterlife career, as a Grim Reaper. I've watched almost all of the episodes, despite my not being a Showtime subscriber (hint: the Darknet is your friend), and I've really become a big fan.

The genius of Dead Like Me is how mundane they've made the day-to-day business of collecting souls. The protagonist, young George (Georgia) Lass, isn't some sort of undead superhero bristling with eldritch powers and mystical knowledge. Instead, she's a low-level, socially awkward entry worker who's been given the bare minimum amount of information she needs to get her job done. Grim Reaping doesn't even provide a salary, so she and her fellow reapers work part-time jobs and run scams to provide for their un-living expenses. The writers have gone in quite an unexpected direction as far as setting up the world these Reapers function in. Where they might have been expected to build up an elaborate mythology (as with Buffy or the X-Files), they've deliberately kept the backstory minimal. Like George, the viewers are given only the barest information about how the business of the dead and their souls works. The Reapers receive their daily assignments on ordinary Post-It notes in the morning, while eating breakfast at a very thinly disguised Pannekoeken Huis, then go on about their business. For George, this means working at Happy Time Temporary Services, for others it means working as meter maids or as petty thieves.

Another favorite of mine is Insomniac, on Comedy Central. It's a really minimal show (do you sense a theme here?) It essentially just consists of the host, Dave Attell, staying up all night in various cities, crawing from pub to pub, stopping in at oddball all-night businesses, and chatting with the locals. It must cost all of 50 cents to make, but theres an amiable, goofy charm to the whole affair. Host Attell is a very funny guy, quick with a quip, but never meanspirited. It's amazing to me how much more interesting I find this show than all of the tiresomely over-conceptualized "reality" programming that overwhelms the airwaves every summer.

I still love 24 -- I think it's every bit as good as it was last season, except for one thing: I am so sick of the Kim Bauer "Perils of Pauline" subplot. Even worse, I think the actress is sick of it, and it's dragging the show down unnecessarily.

I didn't watch American Idol at all last season. Being my usually snobby self, I figured that a competition that was very deliberately aimed at selecting the most commercially viable and mainstream acceptible STAR would have very little entertainment value for a smug, insufferable indie snob like myself. Though it's not "must see" or anything (like 24 or the Dead Zone), I have caught more than one episode of the current season. It's usually entertaining, though I find the host unbearable. Though I can admire the effort the candidates are putting forth, it does seem a shame that only conventionally attractive people with voices suited for singing mainstream pop and R&B are realistically eligible for the competition. I think about the fact that many of my favorite "singers" (vocalists, really, because I'm sure many of them wouldn't call what they do singing, necessarily) would never even get past the first cut of such a competitition. There's no room for someone who sounds like Björk or Sam Prekop or Colin Newman or Stephin Merritt (let alone the real oddballs like Stan Ridgway or Mark E. Smith...)

I don't know whether to be delighted or terrified

The Sci Fi network is bringing back that cheeseball sci-fi nugget of my youth, Battlestar Galactica. As an uncritical 12-year-old, I eagerly watched every new episode when they first aired. When the original episodes started airing in reruns a few years ago, I marveled at the cheap sets, recycled special effects, costumes, and laugh-out-loud plotlines. I wonder if they're going to play it straight?

I just watched NBC's new show, Kingpin. It's off to a promising start. It's been compared to the Sopranos, of course, but, from the first episode, at least. it looks like it's drawing more on the Godfather saga. The male lead, for example, seems like an updated Michael Corleone. It's also cool to see Sheryl "Laura Palmer" Lee in a meaty role.

Anyway, it's good to see an interesting drama show up on network TV. If it can avoid the most common pitfalls (a "very special Kingpin" [David Kelley disease], guess-who's-sleeping-with-who-this-week [E.R. disease], etc.) we might have something good.

The Next Action Star

Someone please kill me. Now.

Okay, I don't usually blog about watching television because, hey, it's television, everybody's got one and there are usually more interesting things to talk about. On the other hand, there are a few things I've been watching lately that are worth talking about, largely because I don't think any of them are in danger of being overexposed.

There are new messages.