An Ode To The Single 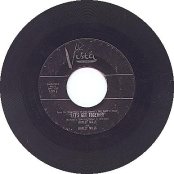 there's only one peach with the hole in the middle...

I discovered my love of music at a fairly young age. I don't know if my family was any more musical than any other typical family of non-musicians living in the Detroit area in the late 60s/early 70s, but many of my earliest memories are of songs we'd hear on the radio while on weekend trips, shopping excursions and camping outings. I have vague memories of being in love with songs like "Tears Of A Clown" and "Na Na Hey Hey Kiss Him Goodbye" and "Love Will Keep Us Together" and "Silly Love Songs", though at that early date (around 5-7 years old) I couldn't have told you who performed them or even have done much more than hum the chorus for you. I can remember the very first single I ever purchased, though. I liked a song by Joe Tex called I Gotcha, which research shows was a hit in 1972, which means I was about 5 years old, and that sounds about right. I can't remember whether Mom gave me money to buy it or whether she just asked me to pick out a 45 while we were at the store. In any even, I know for sure that it was the first non-"kids record" I ever owned myself. I have vague memories of playing my older sister's records, but nothing really specific from that early on.

My first "real" album purchase didn't happen until years later: Parliament's Mothership Connection. Even after I bought my first albums, though, for years my musical purchases overwhelmingly came in the form of 45 RPM, 7-inch singles. American singles of the time were very distinctive looking. Unlike European singles, which replicated the small center holes of 12-inch albums, U.S. singles sported a large center hole. This meant that you usually needed some sort of adapter to play them on a standard turntable. The little plastic adapters were somewhat fragile and impractical, but they sure are a wonderfully iconic element of a bygone age, aren't they?

The prevalence of singles among my early purchases was largely practical. I got a small allowance, which if I remember started out at 25 cents a week, then escalated through 50 cents a week, a dollar a week, and finally $5 a week by the time I entered middle school. When I first started buying singles regularly, they went for about 99 cents to $1.25 apiece. That got you a (usually edited) single mix and a b-side, some of which were purest filler and some of which were fascinating. It would probably seem alien to a music buyer younger than, oh 25 or so, but up until the mid 1980s or so record stores would stock hundreds or even thousands of 7-inch singles, with the top sellers proudly displayed on the walls. Singles were a huge part of the music business, and a lot of record stores devoted just as much space to singles as they did to albums.

My music buying took off in earnest when I turned 12 and got my first paper route. I discovered many artists via 45s during this period, many of which I would come to love and by many many albums by in subsequent years. Some early 45's I bought were by Kraftwerk, XTC, the Police, the B-52s, Devo, Gary Numan, and Yellow Magic Orchestra. I mention this not to try to buld up any cred points, but to point out that the easy, cheap availability of music by these artists made it possible for me to try new things musically without a lot of risk. Albums were a formidable $5-$7 apiece, and $7 bought a lot of M&Ms and Hot Wheels. A kid with a paper route just didn't have a lot of dosh to blow on any full-length album that wasn't a sure thing. For a while, the record industry was fine with this. They'd made a mint on bands like the Beach Boys in the 1960s, who were practically hit single machines, releasing multimillion selling single after single, which would eventually get compiled onto albums almost as an afterthought. Of course, as bands like the Beatles (and eventually the Beach Boys themselves) gained more artistic control they began to deliver albums that stood as coherent statements, but for a long time (from the mid 60s until the early/mid 80s) these two different music markets existed symbiotically.

At some point, some goddamn MBA bastid who I'm sure hated music and only ended up running a record company because his brokerage job fell through, decided that selling cheap singles was bad for the industry. Never mind that the continually renewing lifeblood of the record-buying audience was the enthusiastic adolescent/teenager of limited means but wide-open ears. Instead music was going to be a baby-boomer lifestyle product. The then-new compact disc format was a windfall for the record industry. Consumers spent billions "upgrading" their worn-but-cherished vinyl albums (unfortunately the first-generation remasters of a lot of these classics were often horribly botched.) 45 RPM vinyl singles disappeared from store shelves practically overnight. The odious "replacement", the cassingle, was a cruel joke. They were usually priced twice as high as the 45s had been, sounded like shit, and were utterly devoid of character. They lacked the tactile immediacy of the 45 and the random-access of the CD. Record execs used the utterly lackluster demand for the cassingle as an excuse to shut down the single market entirely. "People aren't buying these things, therefore it's obvious that consumers don't want singles at all."

I've been known to argue that the P2P filesharing boom was karma visited large upon the record industry for killing the single. Since the industry gave consumers no way to buy small numbers of tracks, the street found its own use for things and created its own singles market, and, out of spite, made sure it was a a really, really cheap one. In retrospect, the big news about the iTunes Music Store was that, for the first time since the 80s, someone was trying to do something to recreate a legitimate singles market.

Well, you can't please everyone.