Definition: (noun) A small being, human in form, playful and having magical powers.
Synonyms: fairy, fay.
Usage: She seemed rather an airy sprite, which, after playing its fantastic sports for a little while upon the cottage floor, would flit away with a mocking smile.
Discuss

Our Cat Thinks He’s A Dog

Ziggy really is quite the cat.

The hunter takes down his prey.

Our longtime cat, Giant Kitty, passed away a couple of months ago. She had a good, long life (15 years) and we miss her terribly. We’d decided that we would like still like to have a cat in the house, so we planned to get a rescue cat. Giant Kitty was about 3 years old when she was adopted, and our original plan was to get another adult. We were also open to getting a younger cat, as we thought it would be fun for Jacob to watch a kitten grow into adulthood. 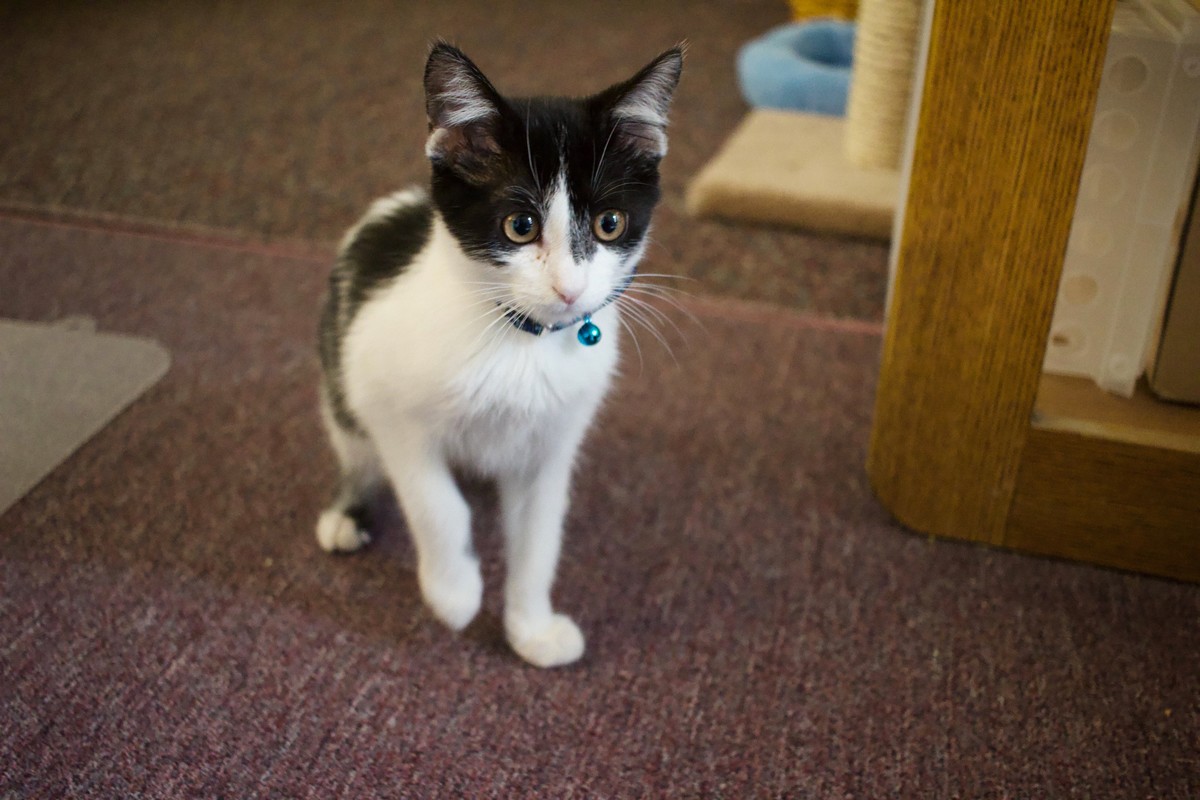 We stopped at the Michigan Humane Society on Saturday and spent some time with the residents. There was a wealth of beautiful animals there, all waiting for loving homes. In the end, we went with Ziggy (née Trucker), whose personality was immediately apparent. He’s a 3-month-old domestic short hair mix. He spent the first few hours hiding behind and under things in my home office, but it didn’t take long for his social nature (and love of wiggly toys) to win out.

Also, he wants to eat your shoe.

This picture is a few weeks old, but I forgot to mention we have a new bunny. 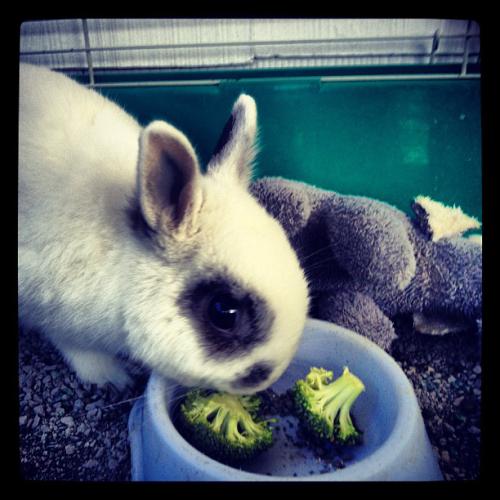 When we selected Bailey at the pet store, he was in a cage with 3 or 4 other small rabbits. They were all cuddled together at one end of the cage, as small mammals tend to do. I realized quickly that it would ease his adjustment to his new home if he had a companion in his cage when we brought him home.

We stopped at a Dollar Tree on the way home and bought a very small stuffed animal, a brown puppy (it was almost exactly the same length as Bailey at the time.) We placed the stuffed puppy into his cage before we put him in it, with the hope that Bailey would think it was another bunny.

Sure enough, after a few hours, we noticed Bailey cuddling up to the stuffed puppy. We were always careful to keep them together — when we took Bailey out of the cage to take him somewhere, we’d bring the puppy too. Over the next few days and weeks, as Bailey grew larger than the puppy, he continued to be very attached to it. If we gave Bailey timothy hay, he’d always drop a few stalks next to the puppy. He pulls the puppy around the cage to keep him close.

And Bailey is terrified of it.

He grabbed his puppy and took it over into the opposite corner. He’s keeping them both far away from this weird new intruder. We’re going to give him another day or so, I think, to get used to it before we give up.

Bailey Stares Out of the Window

Apparently, cats aren’t the only pets who stare out of windows. A few weeks ago I went through a lot of trouble to embed a short video in the “right” way here on the blog. Frankly, it’s way more of a PITA than normal people are going to put up with. I saw a note that Vimeo had introduced “universal” embed code so I decided to revisit the subject. I’ve had a Vimeo account for a while, and I’ve never really used it. It’s a much less noisy place than YouTube, really — it seems like they’ve actually put a little work into interaction design.

Thanks, of course, to Ilkae for the soundtrack.

I liked the way the light looked, streaming through a side window and into the aquarium.

Video was shot on an iPhone 4, and edited in iMovie for iPhone. Soundtrack is Whirling Of Spirits by Balil.

I converted and downsized the video for h.264 platforms in Handbrake, and converted to Ogg for Firefox with ffmpeg2theora. I'm using the Video For Everybody to serve things with the HTML5 video tag. Flash fallback is untested, because I can't be bothered.

Oh yeah, the oranda is Curly, the shubunkin is Chet.

Writing entries without an HTML5 aware version of Tidy is painful. Suggestions welcome.

Your Recommended Daily Allowance of Bunnies

We had to say goodbye to Caroline, our lop rabbit, today. She’d been quite ill for several months, and it was clear that she wasn’t going to be getting any better and she was suffering. I’ll miss her wiggling little nose. We had a good run, little girl!

She, like all my pets, has a human name, because I refuse to name any pet "Spot" or "Fluffy" or "Patches."

My favorite set of pictures of her.

Ambushed By A Kitten Gang

Tammie and I took Heidi and Tony for a walk yesterday evening, about twilight. We have a few set routes that we use for dog walks, chosen to provide a decent overview of the neighborhood. The idea is that if either of the dogs ever gets loose, they’ll know enough about the neighborhood to be able to find their way back home.

One route leads up an access road that runs between the high school and the railroad tracks. It’s a funny little road — it was only built because of resident complaints. You see, the new high school was proposed about 5 years ago and the initial plan was for its campus to run flush up against the railroad right-of-way. The problem with this is that there’s a rail yard about a mile and a half north of the school, so trains are often blocking the nearby rail crossing for hours (despite the fact that it’s illegal for them to do so for more than a few minutes at a time.) Residents insisted that there be an access road constructed west of the railroad so that the neighborhood would at least have access to a bridged crossing a quarter mile further south.

Anyway, the road is a little weird in that it’s got the high school and environs on one side, and the (fenced off) rails on the other. The rail line has always been host to a very fascinating collection of urban (and not so) wildlife. In addition to the expected critters (squirrels, pigeons, woodchucks, stray cats and dogs, the occasional rabbit, small snakes), I’ve also on two occasions spotted foxes and some folks have even claimed to have sighted coyotes.

It was pretty dark by the time we walked onto the road, and most of the light cast is pretty diffuse, coming from the high school. We’d gone maybe 75 yards down the road when I saw two small animals bounding up the grassy area to our right. At first they looked to me like small rabbits, as they were moving pretty quickly and bouncing quite a bit as they did so. Before I could do much more than mention them to Tammie, four more animals came out of the vegetation on the other side of the road and came running straight at us. These were pretty quickly identifiable as kittens. Heidi, our older dog, got very, very excited, and nearly pulled Tammie, who was holding her leash, across the road. The kitten closest to Heidi arched its back and hissed. It couldn’t have weighed a pound, and I think its instincts kicked in when it realized it was looking at about 50 pounds of apopleptic german shepherd. Tony, meanwhile, was simply fascinated. He’s only a little over two months old, and pretty much reacts to every new experience by wanting to play.

We pressed on past the kitten gang, and laughed about how simultaneously cute and creepy the “ambush” was. I mean, yeah they were kittens, but they came up on us really quickly…

We didn’t see the mother cat anywhere nearby, and wondered what would cause an entire litter to travel in a pack like that. We figured it must have been hunger, which led us to the unpleasant conclusion that perhaps the mother was no longer around.

Heidi Got The Hambone

We had a nice spiral sliced ham yesterday. Today we gave the hambone to our dog, Heidi, as one of her Christmas presents. We've jokingly begun referring to it as "the Precious", owing to her rather possessive posture...

I'm sitting on my screened front porch as a cool breeze blows through, listening to a baseball game on the radio, while my dog sits next to me, staring out at the cars and people as they pass by. I'm munching popcorn, she has a well-chewed sock.

I Wonder What Natalie Portman Would Do To Them?

Memo to myself:
Feeding puppies warm grits is an extremely simple way to render them unconscious. The little guys ate their fill, then promptly fell asleep where they were standing. This is pretty much the only peace I've had all day

. Pictures coming if I can unbreak my camera. There are three boys left, the two little girls found homes a little over a week ago.

The meaning of the word "exercise"

...giving a rambunctious German Shepherd/Rottweiler mix a bath, without anyone else around to help you hold her slippery, soapy self in the tub. We had fun, though, and my "little" angel smells wonderful.

I try to keep an open mind, but not so open that my brains fall out.
— Judge Harold T. Stone